With the rapid development of Liverpool from 1700 onwards there was an increasing need for ‘coales’ that could not be met by the existing road transport network. 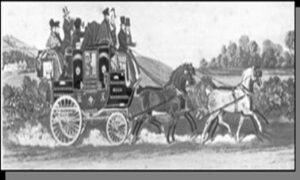 The main source was the shallow pits around the town of Prescot. The road was heavily used by pack-horses, carts and heavy waggons, creating ruts and large holes. In winter, and sometimes even in summer, the road from Prescot was almost ‘unpassable through the great rains’. As early as 1663 the damage to Liverpool’s streets by the ‘frequent driving of carts laden with coales and muggs to the waterside’ was noted. At that time roads were maintained by the individual Townships who collected a rate from the wealthier inhabitants under statutory legislation.

The Turnpike Bill was initially proposed by prominent persons of Liverpool, and from those along the route to Prescot, for the carriage of ‘coales and mechandizes’ from Prescot to Liverpool – this included earthenware pottery. Other goods subsequently carried were slates, potter’s clay, bricks, sand, ‘sope ashes’(from glass making), timber for shipbuilding and cast iron. In the wars with France (1746 onwards), canon and military stores used the Turnpike. The old road (not much more than a track) had been used for the carriage of ‘coales, wool, cotton and malt’ using packhorse and cart.

The Prescot Turnpike Act of 1725 (the first wholly in Lancashire) was promoted by Ralph Peters (town clerk), George Brown (surveyor) and John Woods. The Royal Assent was granted on 26 April 1726.

It ran from the parish boundary of Liverpool at Low Hill to the Prescot town boundary, a distance of 8 miles – generally on the line of the present day Prescot/Liverpool Road. The existing road of a 1.25 yard wide ‘horse causeway’ of cobbles was to be reconstructed at 10 feet wide and, eventually, in the 1760s, expanded to 6 yards wide to accommodate passenger coaches. By 1729 £1,700 had been expended but it was a further 3 years before the first phase was completed.

The Turnpike Trust was granted a term of 21 years to recoup the construction charges and pay for maintenance costs. Toll gates were set up at various locations and initial charges were:

By 1746 nearly £10,000 had been collected in tolls over the first 19 years and the original debt practically paid off.

Five further Acts for renewing charges and constructing extensions to St Helens, Ashton & Warrington came in 1746, 1753,1771,1797 and 1802. Liverpool was at last connected to the national Turnpike network.
Additional transport connections with the town, particularly for coal, came with the opening of the Sankey canal in 1755 (coals from St Helens) and the Leeds-Liverpool canal in 1774 (coal from Wigan).

However, increasing traffic for the Turnpike came from the mail & passenger coach traffic that flourished from the 1760s until the 1840s. The rapid expansion of the railways from the mid 1830s onwards (another ‘first’ for Liverpool), provided easier and cheaper transport for goods and people.

It was not long before the stagecoach was eclipsed and in 1871 the turnpike trust was dissolved with maintenance taken over by the local authorities.