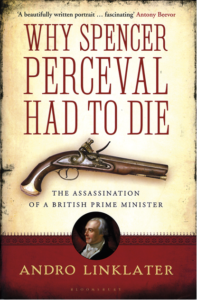 The media has ensured that it would not have escaped your attention that the 22nd of November 2013 marked the 50th anniversary of the assassination of President Kennedy.

However, the 11th May 2012 passed with hardly a mention of the fact that it was the 200th anniversary of the assassination of the leader of the then most powerful country on earth – British Prime Minister Spencer Perceval. History buffs will know that not only was he the only Prime Minister to have been thus despatched but that the assassin was Liverpool merchant John Bellingham, late of 46 Duke Street.

Despite its racy title, this book is a serious, but highly readable, study of what was arguably the most notorious murder of the 19th century – it comes with copious endnotes, extensive bibliography and a useful index and was written by historian Andro Linklater, brother of the journalist Magnus Linklater. In one of those ‘goosebump moments’, the day I finished reading the book, I happened to read The Times, which carried Andro’s full-page obituary; he had died on 3rd November, aged 68.

Without giving away too much, suffice it to say that Bellingham’s self-justification for the deadly deed stemmed from a Russian business deal that had gone sour and his frustration at the unwillingness of government officials in England and Russia to offer him justice and redress for his financial ruin. Liverpool features quite large in the story, including Bellingham’s restraint and immediate identification by fearless Liverpool MP General Gascoyne who “gripped his hand so hard he cried out in pain”.

In what can only be described as a shameful miscarriage of justice, the clearly deranged Bellingham was thrown in jail, tried, strung up at a public hanging at Newgate Prison, and his body immediately dissected… all within one week of the assassination.

However, the sting is in the tail for this saga revolves around Linklater’s own conspiracy theory (shades of JFK!) involving the recently abolished slave trade, the impending war between America and Britain and Bellingham’s shadowy American financial backers. Highly recommended.