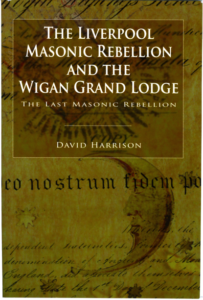 This is the third in a series by Masonic historian Dr Harrison concerning aspects of the history of English Freemasonry. As the text on the back cover comments, the book traces ‘the strange tale of the last great Masonic rebellion in England which occurred in 1823. The rebellion which started in Liverpool, sent shock waves through Freemasonry…and the book reveals a story full of Dickensian intrigue and skulduggery…’

Organised into five chapters (The beginning of the rebellion, The rebel Grand Lodge in Liverpool, The Wigan Grand Lodge, The end of the ‘Antients’, Life after the rebellion) the account is seen by the author as ‘a story of a clash of ideas; the old and the new coming into conflict, but it can also be seen as a story displaying emerging class distinctions, reflecting the anger and frustrations of men from industrial towns who felt that they were not being listened to in a newly united society which was now dominated by a London based aristocracy.’

Although much of the detailed narrative, appendices and illustrations will be of limited interest to non-freemasons, those LHS members who have read with interest the author’s article in the 2014 Journal (‘Michael Alexander Gage; The Masonic Rebel and The Liverpool Waterworks Bill’) will find that this book provides a context for the man who was a ‘tempestuous’ and ‘turbulent’ tailor at the outset of the rebellion, later becoming a land surveyor. Gage is best known to historians today for his highly detailed ‘trigonometrical plan’ of Liverpool which he surveyed in 1835 (not the much simplified version illustrated in the book) and of which valuable use has been made in various accounts of Liverpool including two of the Society’s own.