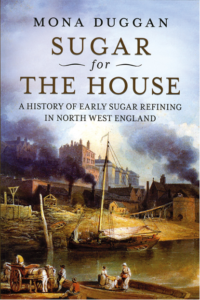 LHS member Mona Duggan, known affectionately as ‘Ormskirk’s History Woman’, sadly passed away at the age of 87 last January. But not before her last book, a history of early sugar refining in the North West, had been published.
Not surprisingly, Mona’s journey began with her discovery that cane sugar had been refined in an Ormskirk cottage in the 1680s. Intrigued, she then went on to conduct research throughout the North West. The book begins with interesting accounts of the birth of the sugar industry and the process of making sugar. Liverpool then takes up the major part of her account whilst other chapters deal with Chester and the south and north of the region.

In the wake of the Great Fire of London in 1666, Alleyn Smith, decided to relocate his sugar refinery to a site in Red Cross Street, off Pool Lane, thus marking the start of Liverpool’s sugar refining industry, which was to last another 300 plus years ending with the closure of Tate & Lyle in 1981. An idea of the size of the industry can be gauged by the amount of sugar imported into Liverpool: 760 tons in 1704; 46,000 tons in 1810.

Mona’s study has been painstakingly undertaken and she clearly spent a lot of time poring over old maps and directories. She admits that whilst she was able to track down the location and ownership of many 18th century refineries, there were virtually no records of their output. “

Perhaps it was this absence of hard facts that led to her claim (surely overstated?) that, “…it was to supply the needs of the sugar industry that the first docks were constructed in Liverpool, the Mersey was made navigable to serve Warrington and the Irwell was cleared to serve Manchester. The roads of the region were also upgraded to enable sugar and coal to be transported to the refineries,…” According to port historian Dr Adrian Jarvis, “Liverpool’s Old Dock was primarily geared to the Irish and coastwise trades and Salthouse did what it said on the packet.” That apart, Mona’s book sheds new light on the early days of Liverpool’s sugar industry and can certainly be recommended.