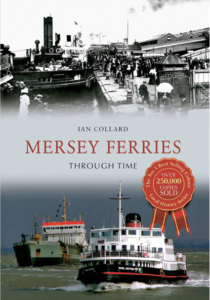 Did you know? –
– That two Mersey Ferry boats took part in a courageous wartime assault at Zeebrugge in 1918, in which 11 VCs were awarded for bravery? l
– That the Mersey Ferries once carried over 30 million passengers a year between Liverpool and Wallasey?
– That the New Brighton Ferry was founded by an Everton builder in 1830?

These details and many more can be found in this illustrated account of the Mersey Ferries, from its inception in 1150 on behalf of the new Benedictine Priory at Woodside, Birkenhead to the less romantic, more regulated but perhaps even more cherished, activities of the present day.

Ian Collard summarises the history of the Birkenhead and Wallasey Ferries in separate chapters, concluding with a final chapter on the years between 1969 and 2012. Each gives a brief overview, concentrating on the more accessible detail available of events in the 19th and 20th centuries. To be realistic, 73 of the 96 pages are devoted to mainly photographic images of ferry boats, piers, landing stages and ferry terminals. It should be described therefore as essentially a visual record of a ferry service once crucial to the greater Liverpool transport system, operating on at least four distinct services across the Mersey.

The high water mark reached in the year ending March 1920, when the combined Seacombe, Egremont and New Brighton Ferries carried 32 million passengers emphasises how important this service has been to the development of both Liverpool and the Wirral Peninsula. The more chastened modern day operations which carry around 600,000 passengers and lose £1 million a year also highlight how Liverpool has changed, with a reduced population and the advent of competing rail and road transport systems.

Those readers searching for a detailed account of the history of the Mersey Ferries need to look elsewhere. The book is sketchy on the pre-Victorian background (both written and visual) and the images are undated and not presented chronologically. On the other hand, Ian Collard’s nostalgic compilation does attempt to recapture the romance of the ‘ferries across the Mersey’.