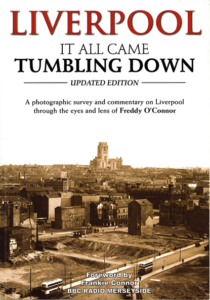 Many LHS members will recall the modest little book of the same name that came out in 1986. I certainly do. One of my roles in those days was running Liverpool’s Tourist Information Centres. Freddy’s book of Box Brownie snapshots of streets levelled during the great slum clearance drive of the 60s and 70s touched the nostalgia sweetspot and we sold it like the proverbial hot cakes.
Fast forward 37 years and Freddy and his Radio Merseyside DJ brother Frankie have produced this worthy large format update that will no doubt have a similar appeal.

This time round, Freddy’s images, many shown here for the first time, have been supplemented by others from outside sources, including the Liverpool Record Office. The text too has been greatly expanded and brought up to date.
It’s a big book, A4 in size with over 500 photographs and maps covering the length of the dock road as well as Liverpool’s inner city areas. There are reasons aplenty for getting your hands on this book, one of which will be to gaze fondly at long-gone Liverpool streets and buildings familiar to you in your salad days!